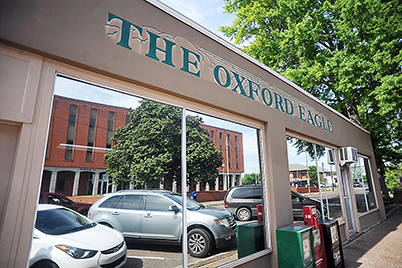 Oxford Newsmedia, LLC, an affiliate of Boone Newspapers, Inc. (BNI), with offices in Natchez, Miss., and Tuscaloosa, Ala., completed its purchase Thursday of The Oxford Eagle from members of the Phillips and Vasilyev families.

BNI and CNL also own newspapers in Mississippi including The (Brookhaven) Daily Leader, The Natchez Democrat, The Picayune Item, The Prentiss Headlight, The Poplarville Democrat and The Vicksburg Post. BNI is controlled by James B. Boone, Jr. (Jim), its chairman. Carpenter controls CNL.

BNI and Carpenter Newsmedia, along with members of BNI’s management team, own and BNI manages 59 newspapers, 27 community magazines and related websites in similar-sized communities in Alabama, Georgia, Louisiana, Michigan, Minnesota, Mississippi, North Carolina, Ohio, Tennessee and Virginia, including The Natchez Democrat, The Vicksburg Post and The (Brookhaven) Daily Leader in Mississippi. James B. Boone, Jr., of Tuscaloosa, is BNI’s chairman and chief executive officer.

The sale ends more than five decades of the two families’ ownership.

“The Phillips family is excited to see Boone Newspaper Inc. take the tradition of The Oxford Eagle to the next level,” said Tim Phillips. “All of our employees have been retained by the Boone organization and we are excited to know that they realize how valuable our staff is. The Boone organization has made the commitment to the LOU (Lafayette County-Oxford-University) community to keep The Eagle the paper it has been for over a century.”

BNI has a rich history of quality newspapers and other publications in the communities it serves, explained in part by Boone’s corporate philosophy: “We seek to produce the highest quality product the economics of the community served can support. And then, by ingenuity and imagination, we strive for a higher quality in an effort to serve and build that community.”

Boone’s philosophy matches well with that of the Phillips and Vasilyev families.

“Our family believes The Oxford Eagle is in very capable hands with the Boone organization,” Rita Vasilyev said. “Under the new ownership, together with the loyal Eagle staff members, the future is bright for Oxford’s ‘hometown’ newspaper. The LOU community will be well served by The Eagle for many years to come.”

Terms of the sale were not disclosed. The newspaper will continue to operate its offices and production facility from its current location at 916 Jackson Ave.