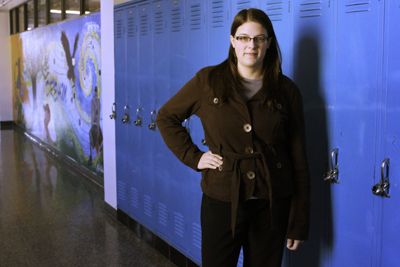 Thanks to Albert Lea Tribune reporter Kelli Lageson, the halls at Southwest Middle School hopefully are safer than in recent years.

The Albert Lea Tribune knew bullying was an important issue. Some parents who worked at the Tribune had children who could describe what was really happening.

Moreover, district residents and some school board members asked questions about bullying during the hiring process for a new superintendent in 2009. Because of existing anti-bullying efforts, the school administration just didn’t seem to think new strategies were needed.

She started at the Tribune in March 2010. In September, Tribune Publisher Scott Schmeltzer and Managing Editor Tim Engstrom talked to her about writing a series on bullying, and she accepted the difficult assignment.

The first installment was on Friday, Nov. 12, and the series appeared every Friday for six weeks.
Lageson interviewed students, parents, teachers and administrators to document how the district was addressing the issue, and she attended events designed to teach children anti-bullying lessons. Coincidentally, bullying became a major issue in the national news that month.

But for one story, Lageson and Schmeltzer led a meeting at the Tribune office with students speaking with the school board chairman and new superintendent about how rough the schools were. In that meeting, the superintendent’s eyes grew wide when students expressed how frequently bullying happens.

Soon after, there was a rotation in principals, most notably giving Southwest Middle a new leader. It’s hard to say if that change directly was connected to the series, but no matter how you slice it, hopefully a better environment for learning was achieved.

Lageson grew up in rural Manchester and lives there. She has a degree in mass communications from Minnesota State University, Mankato, and she likes watching “The Office.”